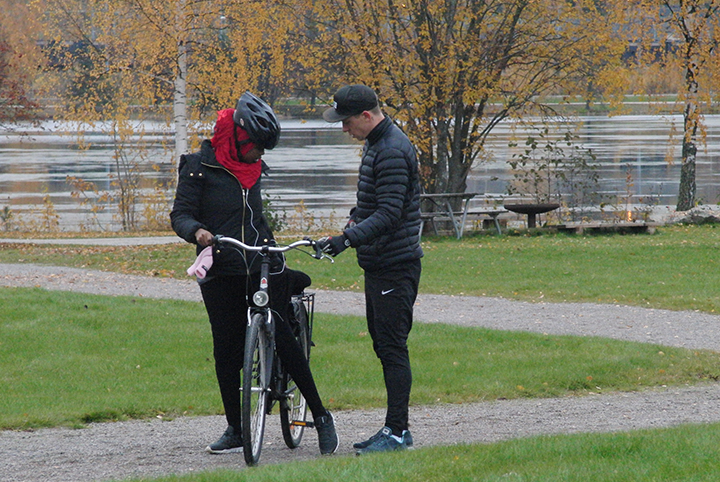 Since the start of the year, Dalarna University has been working with other universities in Norway and Denmark with the project RIPP. Its aim is for students, as part of their placements, to meet "margalised groups" and help in their integration through physical activities.

"We chose to focus on people who are not part of the labour force or who find themselves on the outside of Swedish society," explains Frej Hallgren from the subject Sport and Health Sciences, which offers the coaching programme among its programme choices.

"Our students met a group who are doing traineeships through AIK - job market integration - run by Falu kommun: our aim was to teach them how to ride a bike," Frej Hallgren, who is in charge of the coaching programme, further explained.

Ahmel Mujic from AIK stated how they have been organising cycling courses for a number of years now, so when the university got in touch, he immediately thought it would be a good idea.

Hassanatou Sidibe from Guinea, who came to Sweden in 2012 and who works in a care home for older people, was one of the participants.

"In Guinea, I didn't have a bicycle. It's important to be able to cycle since it is cheaper than the bus and good if you work within the care branch. It's good that the students are here to teach us."

"I'm here because I like biking," explained  Nimo, before getting help on the bike so that she could improve her technique.

The coaching programme has recently been restructured, and one of the new components is frequent placements, which makes the project a perfect addition.

Tobias Lindqvist, one of the students, moved here 18 months ago.

"It's great to get this placement opportunity so early on, because there will be such placements throughout the programme and this way you can see how you develop as both instructor and coach."