Susanna Nordin, researcher at Dalarna University, was recently named Årets Formbärare 2018 by the organisation Svensk Form (the Swedish Society of Crafts and Design), whose goal it is to demonstrate the benefits of good design to social development.
9 Oct 2018
by Mandy Bengts

"It is a great honour to receive this prize and I am also most surprised because I wasn't even aware that I had been nominated," states Susanna Nordin, researcher within the field of health and welfare at Dalarna University. 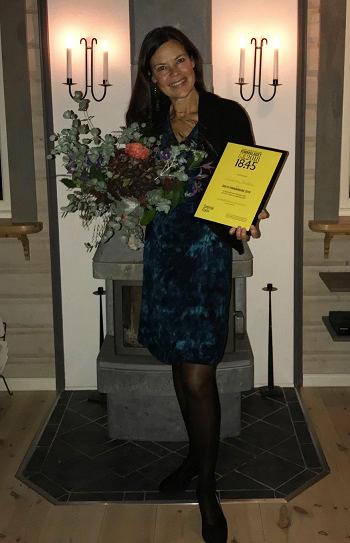 The prize is awarded to individuals, organisations and businesses whose work contributes to the development of form and design. This was the sixth time the prize has been handed out on October 6, which marks the anniversary of Svensk Form.

"The award demonstrates that my research has been noticed by an organisation that works with architecture, form and design outside the academic realm, which is both positive and interesting. There may well be opportunity now to collaborate with Svensk Form, where there is knowledge, interest and dedication when it comes to the development of a good living environment for people."

The nomination describes how Susanna has shown dedication in her studies on how the physical environment affects the well-being and life quality of people living in homes for the elderly. She has developed a method for measuring the quality of the physical environment in existing homes that can be used in dialogue with representatives from the health care branch and architecture branch ahead of new builds or renovations.

Susanna will hold the title for one year until the next October 6 nomination event.