Meet one of our committed exchange students, Josh Vissers, from Lakehead University, Thunder Bay, Canada, and hear what he has to say about his exchange experience in Dalarna at Campus Borlänge.
2 Dec 2016
Communications Department
Share this page Meet Canadian Exchange Student Josh - When Campus Size Matters
We also send information about the page in the message. 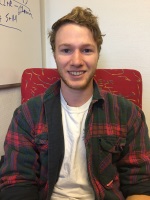 Josh has only one month left of his exchange term with us. Otherwise, he is in his fourth year of studies at the School of Outdoor Recreation, Parks and Tourism. He chose courses from our two programmes in Tourism Studies – the one-year Master in Tourism Destination Development and three-year International Tourism Management.

Dalarna University turned out to be a second choice, when the original destination of the University of Iceland proved to be hard to reach. Josh had to choose courses that showed the closest similarity to those he was supposed to take at home, as this was one of the preconditions from his home university.

He explains, "Well, I believe that the point of any exchange is to learn something new and exciting, something that your home university does not have". This means that students from Lakehead University studying tourism – despite the differences between the two countries' educational systems – are able to find courses in Tourism Studies that satisfy the requirements from their home university.

Josh continues, "Another important thing was actually the size of the place. I would not have liked to stay in a large city. I prefer smaller universities where you have the possibility of close contact with your professors. I also like to travel, so Borlänge with the two hours' travel time by train from Arlanda seemed like a perfect match to me."

Have you been able to travel around both in Sweden and abroad?

"Yes, definitely. All overseas students like to use their time in Europe to see more countries. I have been able to travel to Croatia, France, UK (Scotland), Greece. I visited several places in Dalarna (Fulufjället national park, Sälen, Idre, Uppsala). The time in Borlänge was used for hiking and even occasionally climbing with other exchange students at the university."

What do you think could be improved when it comes to your studies at Dalarna University?

"At first it was confusing to take one course at a time. They are also quite large - from 7.5 to 15 credits. It felt very strange to study one subject and in great deal of detail. At the same time, I realise how nice it is to do that. I know that some of the private universities in Canada have similar systems, but the rest have systems with shorter courses all running at the same time.

It took a while to understand how to check Fronter and find the information about the course syllabus and examinations. I think I just stumbled across this information and was surprised how detailed this information actually was, but it took some time to find it. It was definitely something I needed to sort out upon my arrival in Dalarna."

What would you say to other students from your home university?

"Doing one course at a time is something that is very positive. You have a chance to put 100% of your efforts into your studies, and I really liked that. You get valuable experiences by meeting other exchange students from different countries such as Germany, France and Spain, as you all stay together at Locus (student housing). This allows you to share the costs while exploring the area!"