KTP: Where Ideas and Potential Result in Real Success

Successful collaboration with KTP (Knowledge Transfer Partnerships) - a Dalarna University project based on collaboration with business and industry - has resulted in important and strategic orders from the US for regional company JPS Teknik AB.
10 Apr 2018
Translation based on the original Swedish
Share this page KTP: Where Ideas and Potential Result in Real Success
We also send information about the page in the message.

"I've asked myself whether we would have managed to achieve what we have without KTP, and the answer is a definite no," states the company's managing director Peter Sörell. 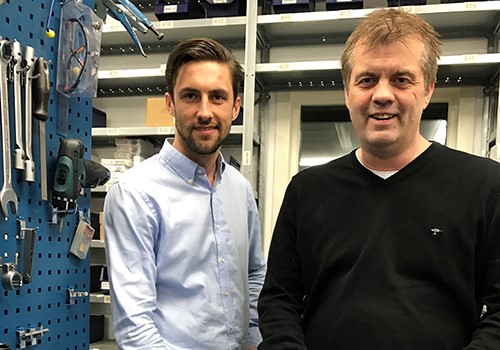 "The collaboration thus far between our company and the University has resulted in a degree project in the area of project launching (spring 2017). This formed the basis in a number of areas for JPS on the North-American market. What's more, a student project in the area of production logistics (autumn 2017) was carried out. We have since begun discussing a new research project," explains Peter Sörell.

JPS is based in the small community of Färila in the province of Gävleborg in Sweden. It manufactures equipment for use in the modern-day forestry industry, selling its unique products on the global market.

How did KTP contribute?

"By way of active internal developmental work and strategic external work with, for example, good contacts with the media and attendance at trade fairs, the KTP project has led to ideas and potential has become reality. At the start of the project, there were hopes that we could access the North-American market. As things stand today, JPS has received a number of strategic orders from the US, and the business coach has helped us with the competence we need on such issues as business law."

Would this all have been possible without KTP?

*The answer is definitely no. Färila is a small community located in a rural area and being able to receive help with packaging and recruitment has been of great importance. The fact that the results and effects thus far have far surpassed expectations is of course extremely pleasing."

"In the summer of 2016, JPS received information about KTP from a consultant at Green Business Region. We learnt that there would be an information meeting at Dalarnas Science Park in Borlänge. The company at that time was working to structure its marketing so that we could take the next step in our development, and we thought the meeting sounded interesting."

Who got the job as KTP Project Leader?

"Erik Arén, whose CV demonstrated among other factors sound managerial training. What is more, he completed some of his studies in North America. We are extremely happy with the work he has done and his interest, will, and plans to continue after the project comes to an end."