Impact - From Knowledge to Practical Application

The growing fact is that those who finance research want to know in advance what the effects that research will have. Often, they require a description of potential results and a plan demonstrating exactly how researchers aim to optimize the effects.
24 Feb 2017
Communications Department
Share this page Impact - From Knowledge to Practical Application
We also send information about the page in the message. 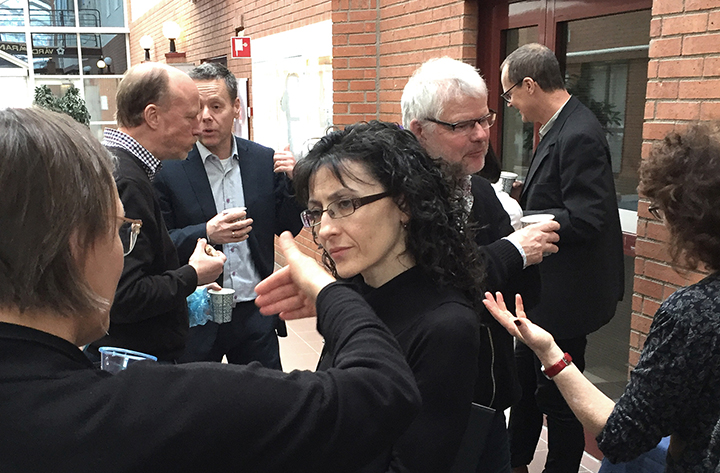 As such, Dalarna University recently invited Rose-Marie Barbeau and Nicol Keith from Glasgow University to head workshops on the subject. Invited attendees were doctoral students, researchers and university management.

The workshops took place February 21 to 23 and were an opportunity for attendees to map and highlight the results and effects of research. Dalarna University is part of the international platform for collaboration called "Accomplish": its purpose is to raise awareness of the significance of humanities-social sciences research as a means to contribute to a good society, an integral feature of Dalarna University's vision.

The visit from Scotland came as part of this collaboration. The project was initiated by Jonas Stier, Professor of Intercultural Studies at Dalarna University, who has long had the idea of organising a meeting of this kind. It was last autumn that he invited Nicol Keith to Dalarna and discussions then resulted in the organisation of these recent workshops at Campus Falun.

"The term "impact" is not without some controversy among us researchers," explained Jonas Stier. "We are not always accustomed to viewing our work from a result-oriented perspective. Worldwide, this subject is becoming more current, which is why I believe we at Dalarna University need to also discuss it."

Rose-Marie Barbeau works as Research Impact Manager at Glasgow University and feels it is only natural at the beginning of any research to reflect on the effects it will have in practice. She explained how it is becoming increasingly common for interested parties to enquire as to what it is the research will result in, not least when they are providing financing. She also highlighted that such deeper reflection on future effects often has a positive influence on research results.

Nicol Keith is Professor of Molecular Oncology at Glasgow University. He stresses the importance of looking beyond one's own field of research and of communicating with researchers from other fields. He also notes the importance of interacting with parties outside the world of academia - not least with those who will make use of the research results in the future. This he terms co-creation.

"New thoughts and insights are gained through meetings with those who have another perspective on your work than you yourself might have," he explained. "It's about exchanging experiences, listening and trying to understand what is happening in the outside world. What are people doing? What aren't they doing?"

Rose-Marie Barbeau who coaches researchers in how to identify the effects of their research talked about how there sometimes is resistance that arises from the notion that you cannot conduct research too strongly towards results.

"This is a misconception," she stated. "It's not about working in a completely different way or about being forced to conduct research aimed at results. It's about reflection and having a broader view of one's work and of describing the possible results of research."