Collaboration between Dalarna University, the University of Gävle and small and mid-sized companies to reduce energy consumption was recognised recently by the European Commission at a ceremony in Helsinki, Finland.
27 Nov 2019
Translation based on the original Swedish.
Share this page European Commission Award for University Collaboration with Companies
We also send information about the page in the message.

“This is truly a great recognition for all the hard work that has been done with KTP - not least because Dalarna University was also the first to implement this model of collaboration,” states Dalarna University Vice-Chancellor Martin Norsell.

“It’s just great that our important work to build on the exchange of knowledge and skills between companies and the university has now resulted in an award from the European Commission,” states Ylva Fältholm, Vice-Chancellor at the University of Gävle.

Knowledge Transfer Partnerships (KTP) is a project in which companies receive assistance from a recent graduate to develop operations in various ways, and the university in turn learns more for future research. In collaboration with companies, the University of Gävle or Dalarna University employs the services of a qualified supervisor and a business coach, and in some cases can also offer access to lab facilities. 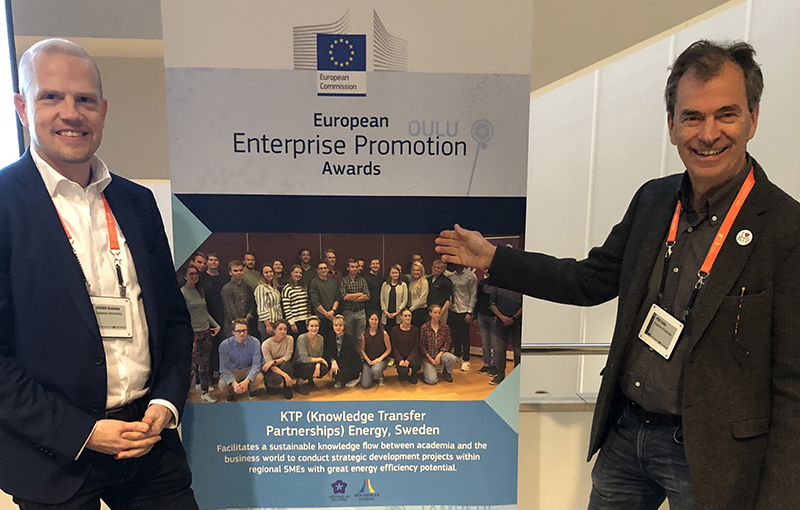 In attendance in Helsinki to receive the award were Johan Kostela, Director of KTP, and Per Edén, KTP Department Head, both of Dalarna University.

“We are both happy and proud, and want to thank our fantastic graduates, supervisors, Region Dalarna, Region Gävleborg, and all KTP companies that made this possible,” states Johan Kostela.

“It’s quite wonderful! Now, we’re going to be able to continue our work with new companies and make a difference in the Gävle-Dala Region,” states Ola Wiklund, KTP Coordinator at the University of Gävle

The European distinction for the promotion of entrepreneuship recognises the efforts made to share interesting methods of promoting entrepreneurial ideaw and is awarded according to six categories. Dalarna University and the University of Gävle came third place in the category “Support in the development of “green” markets and resource effectivisation,” which pertains to national, regional and local levels that make it easier for small and mid-sized companies / environment companies when it comes to energy effectivisation. Nominating the two universities were the Swedish Agency for Economic and Regional Growth (Tillväxtverket) and the Swedish Energy Agency (Energimyndigheten).