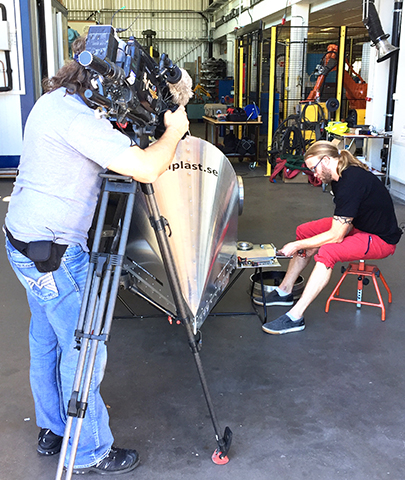 The success story continues for the student invention Eximus with the arrival at Dalarna University of the Canadian Discovery Channel.

A team from Canada spent the day on July 21 filming the students who are behind the development and production of the vehicle known as Eximus.

Back in May, the students entered the Delsbo Electric competition and went on to win with their Eximus entry, beating out fellow competitors from other Swedish universties. The aim of the competition was for entrants to build a low-energy vehicle that moves on rails. Not only did the Dalarna University team come out victorious, but they also also managed to beat the world record in terms of low energy consumption.

The Discovery Channel production team filmed both inside the lab as well as on a stretch of railway in Borlänge. The film will be broadcast in the science and technology programme series Daily Planet at a date yet to be decided.

Mikael Kalrot is studying Mechanical Engineering and is just one of the student inventors. He has been interviewed for a range of media, both Swedish and non-Swedish, but explains that this latest experience is something totally different.

"It's been somewhat nervewracking but of course totally great to receive so much attention for the project," he explains.

Despite all their work, the student group could never have anticipated how successful the whole project would be.

"To win and then at the same time beat the world record was something I didn't even dare to imagine," he states.