Collaboration with Ski Centre Leads to Job Opportunities for Students

Meet Marco Appolonio from Trieste, Italy
16 Dec 2016
Communications Department
Share this page Collaboration with Ski Centre Leads to Job Opportunities for Students
We also send information about the page in the message. 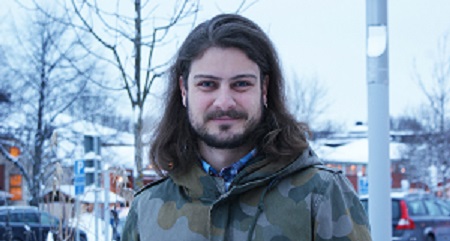 From Trieste in northern Italy, Marco Appolonio is in his third year of studies in the International Tourism Management Programme. With his background as an experienced skier, it comes as no surprise that he applied for a job at the local ski centre near Borlänge, Romme Alpin. This close proximity to skiinig facilities was also one of the reasons he chose to come to Dalarna University.

"Before coming to Dalarna, I lived in Poland for three years," he explains. "There I worked for an oil company but began to feel that I need to do something else. My passion is skiing and mostly teaching others how to ski. My girlfriend and I were wondering about the future: should we stay in Poland? Return to Italy? Or try something completely different?"

The final choice was Dalarna University, with its International Tourism Management Programme, which suited Marco - and which also had close access to skiing. In the autumn of 2014, Marco arrived in Falun, after which he applied for a job at Romme Alpin.

"Falun and Borlänge, where I study, suit me perfectly," he explains. "My girlfriend now works as a teacher and is equally passionate about skiing."

Marco has now begun his third season as skiing instructor at Romme Alpin and this year will be instructing other skiing instructors. He is one of some 25 international students working at the local skiing facility.

"We have close collaboration with Dalarna University and each season employ both international and Swedish students," explains Viktor Funcke, Romme Alpin.

The fact that so many international students find work at Romme Alpin - and that it has worked so well - has resulted in the facility having to change its language policy.

"Before, all staff had to be able to speak Swedish," explins Viktor. "Now the requirement is that they have to speak fluent English. The first year was a bit uncertain as we wondered how our guests would respond to the fact our staff used English, but the response we received was positive. Having both Swedish and international staff has also shown itself to have a positve effect on group dynamics."

Marco, meanwhile, has just one semester left in his programme: his plans?

"My dream is to get a full-time position at Romme Alpin. That way I would be able to have both a job as skiing instruction that allows me to apply what I have learnt in my programme."