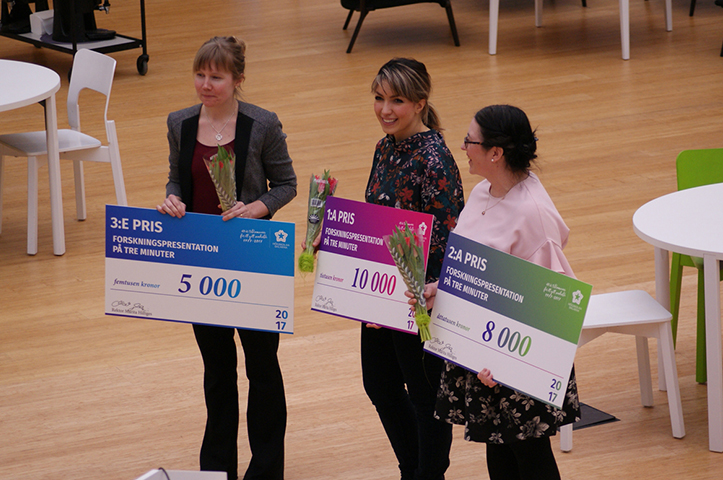 This year was the first for the competition at Dalarna University that gave doctoral students the opportunity to present their research to a jury in the hope of winning one of three prizes. The aim was for them to do so in a maximum of three minutes.

In front of an audience at Campus Falun library, the doctoral students delivered their presentations, after which the jury judged them based on certain criteria.

Opening the competition was Renée Fläcking, Director of Studies at Dalarna University. The jury, meanwhile, comprised Patrik Pettersson from Dalateatern, who looked at presentation technique and stage presence; Jens Runnberg, politicial journalist at Dalarnas Tidningar, whose focus was how the presentation and subject worked together; and Kerstin Öhrn, Professor and Deputy Vice-Chancellor at Dalarna University, who judged the description and purpose of the research.

The doctoral students represented five of the University's six research profiles, which made for a widely diverse list of subjects. The presentations were strictly timed and after each one, the jury allocated each researcher a number of points and direct feedback on their performance.

"All doctoral students gave fantastic presentations and we had the opportunity to learn a great deal about what research is being conducted at the University," said Kerstin Öhrn at the end of the competition.