Best in the World: Energy Efficiency

Finally, it's official! Eximus 1, the rail-bound vehicle that broke the world record in 2016 for energy efficiency, has made its long-awaited appearance in the Guiness Book of Records.
29 Jan 2018
Translation based on the original Swedish text.
Share this page Best in the World: Energy Efficiency
We also send information about the page in the message.

in autumn 2015, the Eximus project commenced with an element of uncertainty. For the first time, Dalarna University would be competing with its own vehicle, constructed by students, at the competition Delsbo Electric.

"We didn't know if we were skilled enough or if we had the right students for the project," explains Patrik Kengery, Faculty Director for Material and Technology. "We soon realised that we did."

The competition Delsbo Electric involved both developing a rail-bound vehicle that was battery-driven and that could hold six passengers as well as driving it three kilometres along a railway track. The vehicle that used the least amount of energy per person and kilometre would be deemed the winner. Students from Dalarna University not only won with their Eximus 1, but they also broke the world record in energy efficiency. Fredrik Gustavsson, Jens Bertilsson, Benny Magnusson and Michael Kalrot are now proud holders of the certificate they received from the Guiness Book of Records. 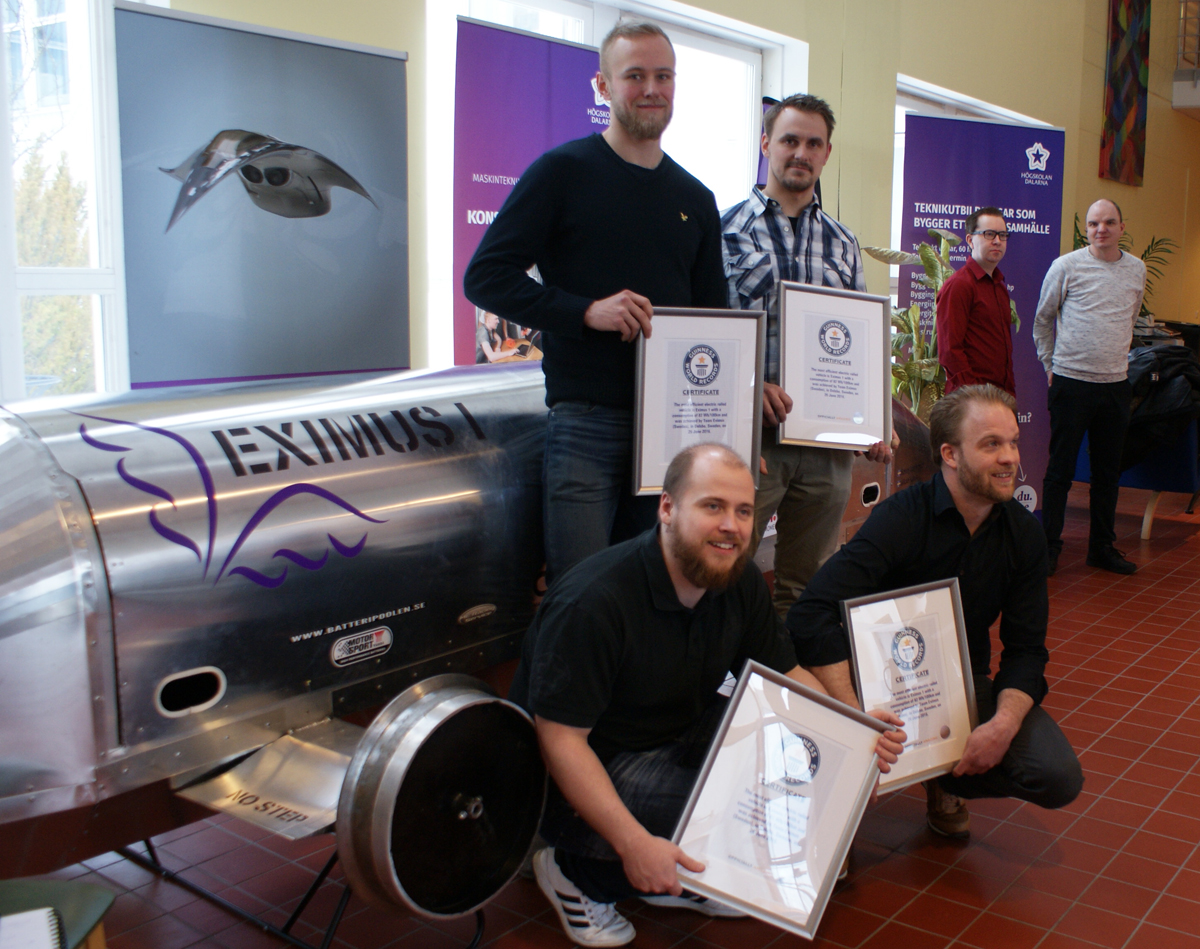 The happy record holders in front of their world-record vehicle.

"This achievement testifies to the high quality of our engineering programmes and the fact that our students have the skills necessary to deliver good results," states Patrik Kenger.

Fredrik, Jens, Benny and Mikael have now completed their university studies and entered professional life. What has the Eximus project meant for their future careers? 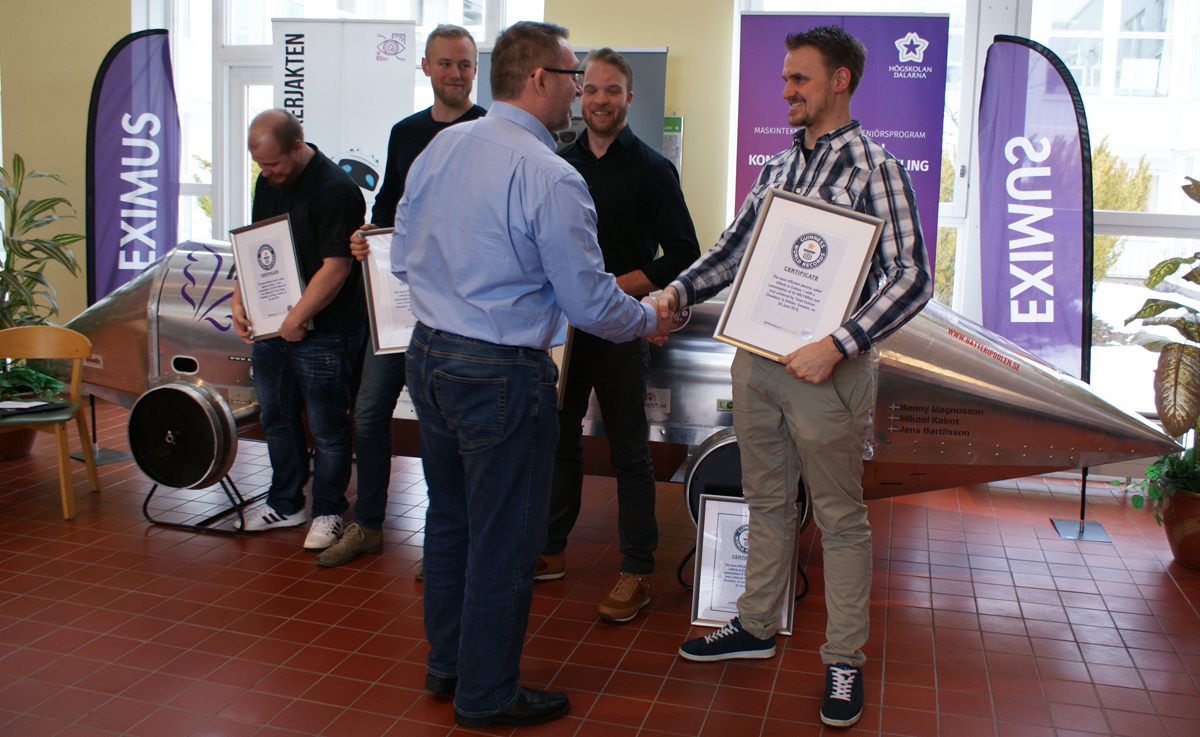 Patrik Kenger hands out the certificates to the award-winning students.

"The experience of being nvolved in such an advanced project is invaluable to have in your CV," states Fredrik.

The Eximus 1 success story has resulted in interest from many other students. Last year, Eximus 2 was constructed and went on to win Delsbo Electric. It proved to be an even more energy-efficient vehicle than Eximus 1 and is consequently the new world-record holder. This year, Eximus 3 will be under construction and new for this year is that upper-secondary school students from Soltorggymnasiet in Borlänge will be involved. The goal for those students taking part in the project is clear: "We're going to do everything just a bit better than our predecessors," states Karolina Gilén.

All the students who were or are still actively involved in one of the Eximus projects. 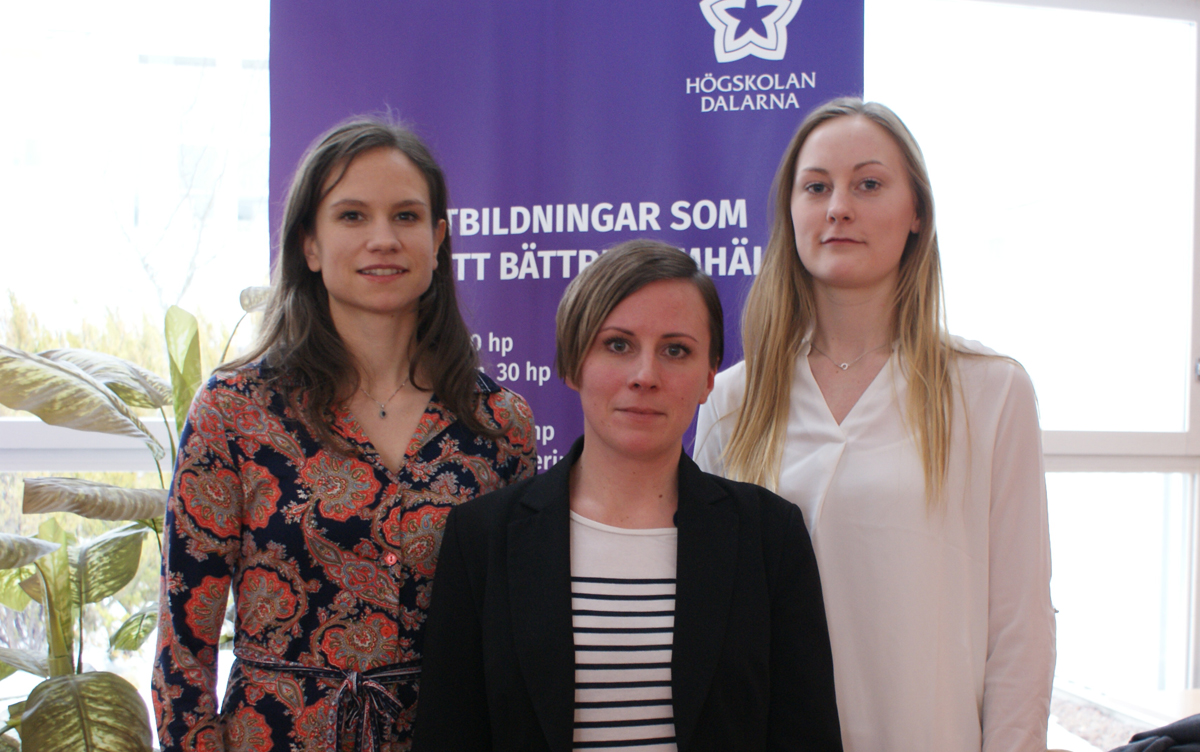 Sanna Ottosson, Karolina Gilén and Michelle Jansson are three of the students to be involved with Eximus 3: they are looking forward to the next world record.

What is it about Dalarna University that has brought it so much success with these battery-driven, rail-bound vehicles - so much so that it continues to beat the well-known engineering universities like Chalmers and Luleå?

"i think it's the comprehensiveness of our project and it's our environment," explains Patrik Kenger. Everyone involved is part of the team in a non-heirarchical structure. What is more, it's an opening for students who have a true interest - an opportunity for them to flourish in a long-term and advanced project."