Christmas Questions - Such As When Is Jesus's Birthday and What Does a Goat at Christmas Symbolise?

What is, in fact, Jesus's birthdate and does the Christmas goat really symbolise the devil? Dalarna University's student chaplain, Anders Litborn, provides an explanation so that you in turn might impress your family with your knowledge at the Christmas dinner table.
22 Dec 2017
Translation based on the original Swedish

Who is the Swedish jultomten?

Traditions change over the decades and centuries. They are borrowed and shared across continents and merge over time. The Nordic jultomte is a multi-cultural figure with mixed origins. Santa Claus, as the figure is in English-speaking countries is called, originates from present-day Turkey. He - Nicolaus - was a generous person who became a Christian bishop. The Nordic tomte has his origins in folklore: a small creature called a vätte guarded an area of land - tomt in Swedish, which therefore led to the word tomten for the Swedish equivalent of Santa Claus.

What is the connection between Jesus and Santa Claus/jultomten?

Jultomten is a kindly figure who likes children, exactly as Jesus did. The holy Nicholas gave money to a poor family because he wanted to be a good Christian. You could also say that we receive Christmas presents just as Jesus received presents upon his birth from the wise men in the story from the bible.

On what date exactly was Jesus born?

Knowing exactly when Jesus was born is impossible. There was no registration of births back then, and traditions that are in keeping with his birth only arose after his death. It has been established historically that Jesus did exist, which means it is certain he was born. Otherwise, interpretations vary. There was likely a miscalculation when people tried to count backwards as a means of establishing his birth year. Religious freedom ensures that we can celebrate in any way we so choose. Christmas celebrations came to be held on December 25 in the fourth centrury in conjunction with Christianity becoming official in the Roman Empire. In the Orthodox Church, the birth of Jesus is celebrated on January 6.

In Swedish, Christmas presents are called julklappar. It is true that the first julklappar were bits of wood that were thrown into people's homes?

In days gone by, Christmas gifts were homemade. They could be for fun - a bit of wood or a figure made from straw. A gift could also be a bit finer than that, such as a wood carving or a cutting board - sometimes with a text explaining why the recipient was worth such a gift, a rhyme perhaps.The word julklapp comes from the fact the giver of the present knocked on the wall of the house to indicate when the present had been left.

Why do we have Christmas trees?

Holy trees appear in many variants in various religions throughout history, and people have decorated their homes. The tradition of the Christmas tree is said to herald from Germany. Generally, Christmas trees are decorated with Christian symbols, for example a star at the top of the tree and angels.

Why do we hang red baubels on our trees?

If you don't have any pets or candy-hungry humans in your house, you might hang sweet things, nuts or fruit. In Sweden, the tree is then "danced out" of the house - so-called julgransplundring. The colourful baubels are instead of apples and other fruit. 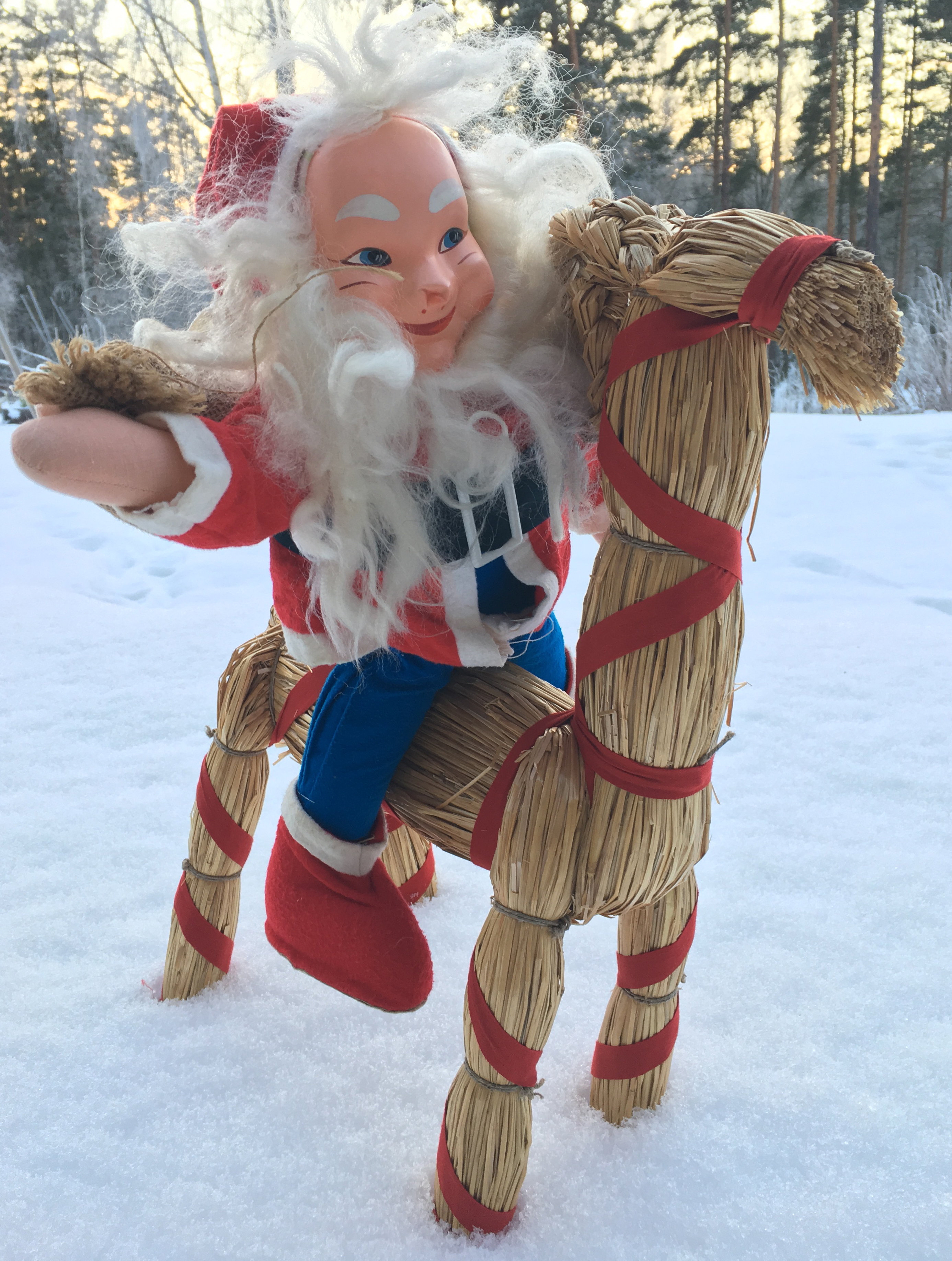 Why is the Christmas goat part of the festive celebrations? Isn't it true that it symbolises the devil?

In many traditions, good is always accompanied by evil; existence cannot be simply interpreted. The goat is one such dubious accompaniment.

Of course! Just think of all the pictures there are to prove it!